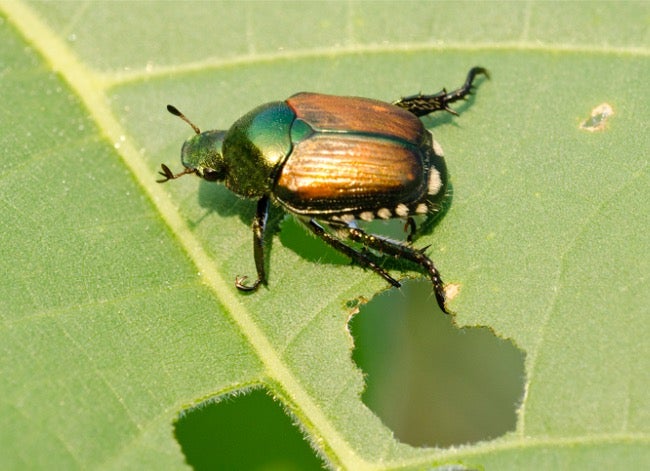 Japanese beetles can be harmless to humans, but that doesn’t mean you want them around. This invasive insect feeds on more than 300 plants and costs the United States more than $ 460 million a year, according to the Pennsylvania State Extension. They will eat the leaves of the plants and even the flowers.

As the name suggests, these insects are originally from Japan but are now found in much of the United States. Adults have a distinct metallic green or bronze color on the back. They are approximately 13mm (Â½ inch) long with copper colored front fenders.

If you find a Japanese beetle, you will find more. But there are some simple things you can do. We are going to show you how to get rid of Japanese beetles with a few different strategies.

It is best to get rid of Japanese beetles as early as possible because once their numbers increase, it becomes more difficult to get rid of them. Additionally, beetles are attracted to the scent of ripe or diseased fruit, so keeping an eye on your plants is one of the best prevention methods.

A simple solution of water and dish soap can suffocate Japanese beetles. Take a bucket and mix a quart of water with a teaspoon of dish soap. Dish soap doesn’t have to be a specific brand, any brand will do.

Once you’ve mixed the water with dish soap, the less “tricky” solution is to pour the soapy water into a spray bottle and spray the beetles on your affected plants. This can knock the beetles off the plant and eventually become food for predators such as birds.

RELATED: 20 Tips to Keep All Critters Out of Your Yard & Garden

One of the easiest methods to get rid of Japanese beetles is by hand. Since Japanese beetles don’t move quickly, bite or pinch, you can just go into town on these little pests with your fingers (wearing thin gloves if you prefer).

Once you’ve removed a beetle from the plant, place it in a bucket filled with your soap and water solution so that the beetle chokes and dies. When you’re done cleaning up is easy since you can just empty the bucket.

Neem oil will kill Japanese beetles before they become adults. And since neem oil is not poisonous, you can spray it directly on your affected plants.

Here’s how it works: When male beetles ingest neem oil, they pass it on to the eggs. Then, the hatched larvae will eventually die before they become adults. The best way to kill Japanese beetles with neem oil is to spray the oil before the beetles reach their adult stage so that they ingest it before mating.

Keep traps away from target plants.

Japanese beetle traps are a great way to keep an infestation of these pests from getting bigger. Traps work by attracting male beetles and killing them before they can mate.

There are various traps available for purchase, but the main idea is that the trap contains some sort of attractant such as a pheromone (chemical messenger) to attract males to the trap. Then they are killed either by a poison or when the trap contains a mechanism to prevent them from exiting.

RELATED: How To Get Rid Of June Bugs

Use row covers during the peak feeding period.

A row cover might be the best solution to stop a Japanese beetle infestation before it starts. Row covers provide protection by keeping Japanese beetles out, but are still thin enough to let in light and some moisture, allowing plants to keep growing.

Row covers are best used during peak feeding times for beetles, which typically extend from mid-June to mid-August. The covers are available in different sizes and can be used on shrubs or trees or placed on your flowers, ornamentals or vegetables in the garden.

Even though Japanese beetles are harmless to humans, that doesn’t mean you want to roll out the welcome mat. Keep in mind that once you find a Japanese beetle, there will definitely be more. While it’s best to stop an infestation of these invasive pests early on, these proven remedies for getting rid of Japanese beetles – with soap and water, neem oil, picking them up by hand, using traps or row covers – can help ensure your flowers, vegetables and other plants stay healthy throughout the peak feeding season.

2021-03-27
Previous Post: Everything you need for a Rule of Six Garden Gathering
Next Post: 5 ideas for allotment garden projects